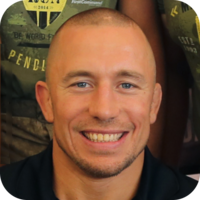 Mixed Martial Artist, Former UFC Champion
Widely regarded as one of the Greatest Of All Time

Page in development, please check back

Georges St-Pierre discusses his work with Karate Combat and their upcoming season, how he feels about Jorge Masvidal and Colby Covington alleged altercation, fighter pay, Francis Ngannou’s issues with the UFC, the moment he had with Nick Diaz, and more on The MMA Hour with Ariel Helwani.

Georges St-Pierre is an MMA fighter. John Danaher is a martial arts coach. Gordon Ryan is a submission grappler. Each are considered by many to be the greatest of all time in each of their respective disciplines.

This My First Million interview is provided by GQ Sports.

Georges REVEALS How To ACHIEVE ANYTHING By Mastering Self-Discipline! 7/21

Learn a few Jiu Jitsu tips from Georges St-Pierre in this episode of The Gentle Art by Hayabusa.

Take a step into the mind of GSP as he speaks about his UFC career, experience with BJJ, and provides advice for those who practice Brazillian Jiu Jitsu in this exclusive uncut interview with Hayabusa.

See further information about Georges on the Hayabusa website.

UFC correspondent Megan Olivi chats with GSP backstage at UFC 196 to see what he's been up to. GSP discusses his recent interest in gymnastics, McGgregor vs. Diaz and more!

And STILL, welterweight champion Georges St-Pierre gives Joe Rogan his thoughts on undoubtedly the most difficult fight of his long career and alluded to possibly taking some time away from the Octagon.